We caught up with the talented gentlemen of Norwegian Rain, Alexander Helle and T-Michael. Getting an insight into their new AW14 collection, we sat down with the duo to talk to them about their thoughts on the new seasons garments and the complex thought process that goes into each esquistely tailored piece.

With high-tech function and practical pieces concealed beneath expert tailoring for the modern gentlemen, Norwegian Rain continue from strength to strength, refusing to compromise on style.

View Cecilie Harris' previewing editorial featuring some of the latest garments from the Norwegian duo. Modeled by Philip Ellis at Established Models, he shows us the most stylish way to stay dry.


It makes me incredibly proud to sithere and talk to you guys: Norwegian to Norwegians. Let's about your journey taking your idea outside of Norway.
Alexander: It’s quite interesting because we pre-launched the brand at the end of 2009 in a pop up shop on a small street next to Michael's shop. A street that I don’t think I have ever walked down. A journalist from Dazed and Confused Magazine happened to walk around and noticed this little shop that we had had for a couple of weeks.

Was this in Bergen?
Alexander: Yes. It was so random, a journalist walking in the street of Bergen that I as a local have never been. So what’s the chance of that? She found us and wrote a piece, which was of course a great start. Just after that we were invited down to Milan to showcase the collection. Following that Vogue Italy picked us out as one of the new talents of 2010, and before we knew it we were in Milan, which was very crazy.

Instant Analogue by Cecilie Harris. With special thanks to IMPOSSIBLE.


Michael: We didn’t really expect that and you get back home and think, wow did we just do that. It was amazing. When we were working on the collection we decided that we would rather not focus on the domestic market. We knew that if we did that we would still have to compete with the rest of the world and every other designer out there. It doesn’t matter what you're selling you're still competing with the rest of the world, so you might as well just go out and grab it by the horns so to speak. We went out created the website and the profiling, got the right design people, the right photographer; the whole set up was complete to send it out. It was a stroke of luck when the Dazed and Confused journalist showed up; but we had our work ready to be sent out. From that point it just spiralled out really. Everyone who saw the website and the look book wanted to know a bit more about it, so I think our initial idea paid off. From then on it was like, "ok there's no stopping us now, lets keep on going". And it has been brilliant ever since. For us it is not just numbers and where we are selling, it's the response we get from people that we love. People love the coats, it is much more satisfying. With any little detail we’ll sit down and talk about it for hours. And then we try them out and we break it down into what is or isn’t working. So the garment itself is sort of a trickle of everything that we’ve thought about and spent time on for the past 6 months. And then when we get the right response, there's nothing better than that.

Alexander: It seems as if it all happened just as we launched, but we worked three years before that. So that wait took a long time.

What do you guys feel about the general design landscape. I am seeing more and more Scandinavian designer brands out there.
Michael: I’m talking off the top of my head, but the last 6-7 years there has been a change in Scandinavian fashion, I remember back in the day when there was the Danish Bohemian look and the Swedish had their pre-fab kind of look that was all tailored, but not quite tailored. I think that disappeared slowly, because now you can’t differentiate the two countries in a way. The reason I’m saying Denmark and Sweden when I’m talking about Scandinavia is because they have been out there, and Norway has always been lagging behind. You know there is a reason for that, one because we’re not inspired to move into clothing, most people are practical and they’re fine with that. It has changed in the last few years and I can name maybe 4 or 5 designers either based in Norway or with Norwegian backgrounds, creating their own unique fashion. It’s not in the same way as the Danish or Swedish would do it. I think the more you put them together and the more you look at it, the more you realise its actually very significant and a very strong collection to look at. Those Norwegians have made huge leap, but for Denmark and Sweden it's always been there, evolving, which is great for them. They have some great designers out there, but for Norway there was practically nothing, and now we see some Norwegian designers starting to emerge. But for me that's my take on it and I think it’s exciting for us now. I hope it is going to spiral off in the years to come.
Alexander: Then of course Scandinavia has harsher weather conditions, so in comparison to Italy and Southern Europe where you can have more seducing clothing, it's more practical. It is one of those natural elements that give a direction for what you do, and I guess that's the link you can see in Scandinavian clothing, It doesn’t have to be functional weather wise, but it’s always practical in a way.

What I love about your brand is that you combine practicality with beauty. I was going to ask what sets you guys apart from other rainwear, but I feel I have asked and answered my own question. Would you agree?
Alexander: Simply, Yes.
Michael: The function comes first and the design comes afterwards. We figure we need to keep the water out. How do we then create our different pieces? Will water run into the pockets? How do we cover it? Stuff like that, it's a natural thought process to it. In between we try to enhance each piece that has to be on a garment and after that all that is left is functional pieces, but camouflaged into details.
Alexander: You can be comfortable because you are dry from the rain, but you’re not comfortable if you’re dry from the rain but look like a fruit or something. So that comfort thing is linked to different things and that’s what we live in. In Bergen. You need something that is hardcore, whilst still feeling stylish.

Absolutely. Growing up in Bergen where it rains 2 out of 3 days your collection makes total sense. I'm guessing where you are based inspires what you do?
Alexander: It’s a necessity. Very simple.
Michael: I tend to look at Norway slightly different than probably most Norwegians would. I see all the things that you see, but I see something else as well. And I think the more Norwegians travel the more they see what I do. There is something about Norway that is fantastic, it has an old soul. There’s no nasty surprises, you know. Once you get out of it and you get back in again you realise that there is so much beauty and things you take for granted, and that's what most people probably don’t see. They just take these things for granted everyday.

Norway for me is now a fairytale land of beauty and where everything is perfect. I mean it rains a lot and its cold, but perfect still.
Alexander: Everywhere has its pros and cons. Bergen is a very small city, trapped between 7 huge mountains which of course makes beautiful scenery, but it makes it a bit claustrophobic. But then again it brings all the creatives close together geographically, so it's easy to collaborate and know what everyone is up to.

Talk to me about the new collection.
Alexander: It’s exciting!
Michael: We sat in Florence having a meal and decided to analyse Norwegian Rain. We decided to not be too technical, but at the same time to keep that technical mix, making it less visible on the surface so the fabrics could be more tailored. In Norway it can get really, really cold, and instead of layering that with an extra jumper underneath it, we thought we would make the coats a bit heaver and chunckier, with more thermal properties. We also decided to add a few more traditional pieces to the collection, like the bomber jacket and the cape.
Alexander: Ah. The bicycle piece.
Michael: This is cool, because there is a video from Poland, just outside the factory where Alex is trying the coat on and cycling. Priceless.
Alexander: We teamed up with SuperDuper Hats who make hand made hats in Florence. Taking a classic approach to a good handmade hat, but making it waterproof. It is cashmere and lined with waterproof fabrics on the inside and on the seams. We also started with shoes, a little teaser project, that has a sole made from milk from a tree used by Mayan Indians 800 years ago. Extremely elastic and comfortable.
Michael: The sole I think is important to mention, is a French manufacturer. After walking around to about 60 or so this man invited us in, and boy did he have a story. He started talking about the milk soles, which in itself was what we wanted.
Alexander: I feel like I am sitting on my Grandfathers lap listening to Michaels stories.
Michael: Haha you know it. So it all comes together in a way. We found this titanium tanned leather, which is water proof as well the same day. Priceless. For us its a huge honour to be working with someone that we respect and love the work of.

What are your visions for the future?
Alexander: One of the most exciting things we’re working on now is to create the space in London. It's the first time we are doing something permanent abroad. We are extremely excited!

Will it be just as special and beautiful a shop as your shop in Bergen?
Michael: It will hopefully be better then that!
Alexander: There are a lot of people that we look up to who do different things in Bergen, artist and architects and suddenly we have something that we can work together on. It's very exciting.

We can't wait to see more from you guys and are even more excited to see the new shop!

Interview by Cecilie Harris.
Words by Cat Wilding.
With special thanks to IMPOSSIBLE. 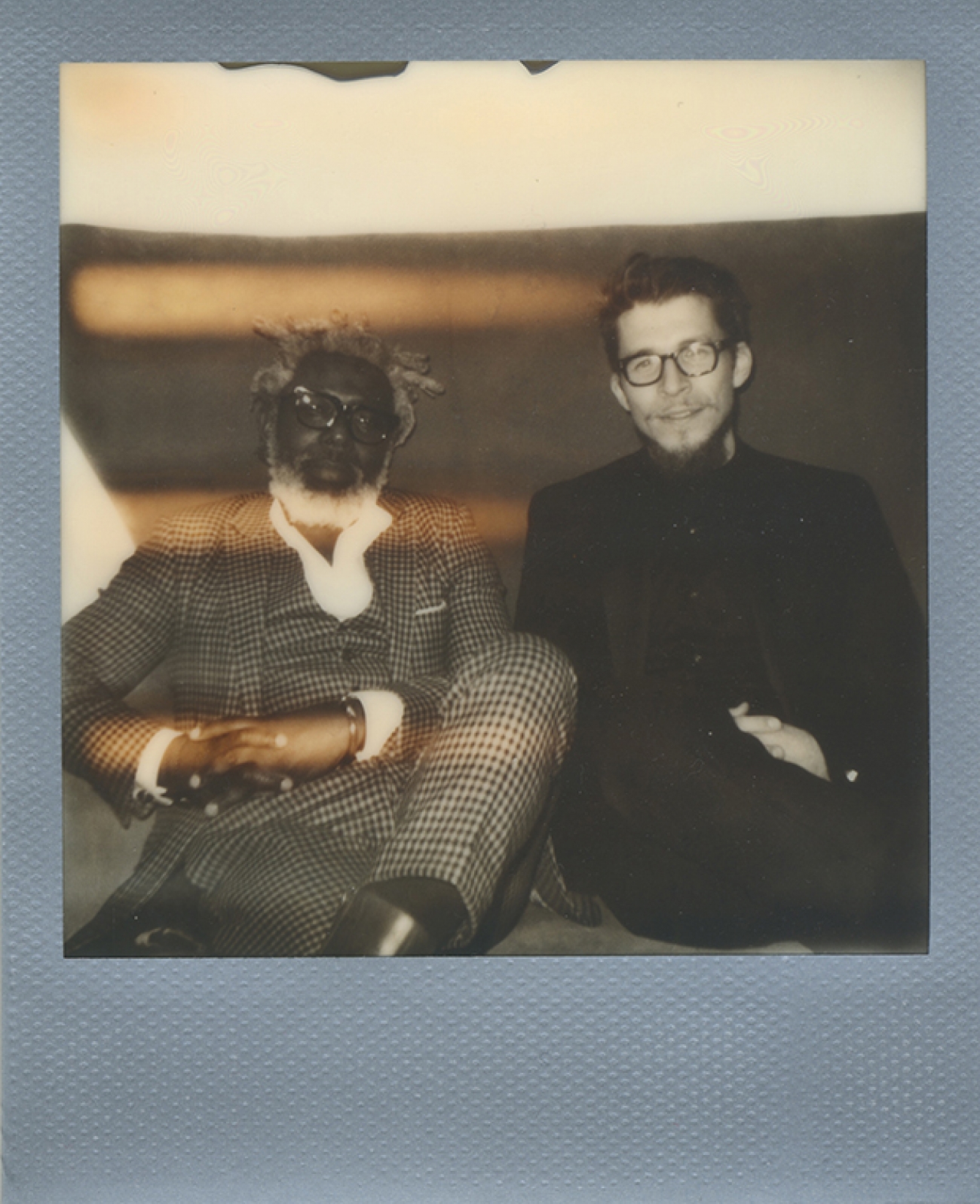